Theory of the neuronal circuity of the brain and analytical thinking

Part 1.3 The single and double negation of neuronal signals

But can neurons use these signal values to carry out binary operations, just like modern computers do?

Here we should introduce the concept of the envelope. Every output signal of a neuron, whose output can change in time at will, can be assigned an envelope if the action potentials are represented as a function of time. This envelope, except for jump points, always runs parallel to the t-axis (time axis) and has only two possible values: 0 or 1.

Sketch 1.7: Envelope of a neural signal and binary value of the signal

Nerve cells are available as "arithmetic operations" only for excitation or inhibition. The existence of single signals in the nucleus subthalamicus has already been proven.

We now investigate what happens when a neuron N1 generates a signal s1 and this signal inhibits an existing continuous signal. The simplest type of inhibition is complete inhibition.

Sketch 1.8: Inhibition of an ice signal by a signal 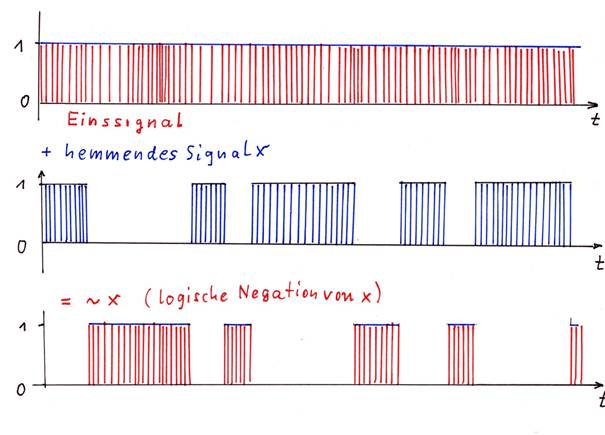 The on-signal (red) is totally inhibited by signal x (blue), the result is signal ~x (red), which represents the negation of signal x.

Here it becomes clear: If a signal S completely inhibits an input signal, the result is the logical negation ~S of the output signal S.

If a neuronal signal S strongly and completely inhibits a continuous signal D = 1, the output is the negated signal ~S.

Note that there must be complete inhibition here. With a relative, maybe even weak escapement, there is always a residual signal left where the zero signal would be present with complete escapement.

Already at the beginning of the section neuronal nuclei were defined. Here two new neural nuclei can be defined.

However, a negation nucleus can also provide inhibitory output.

Theorem 1.7: The globus pallidus interna is a negative negation nucleus for the striosomes

The globus pallidus interna receives GABAergic input from the striosomes of the striatum and excitatory input from the nucleus subthalamicus. Its output consists of the negated striosome output and has an inhibitory effect on the target neurons.

Sketch 1.9: The globus pallidus interna as negative negation nucleus for the striosome signals 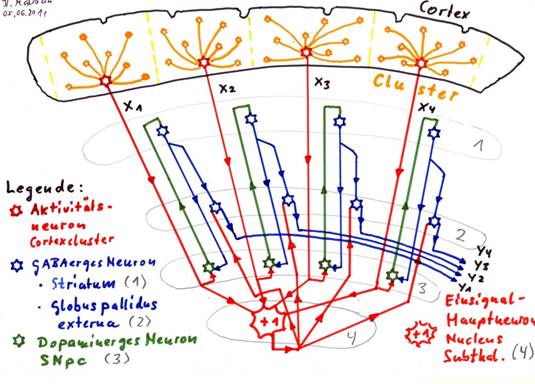 Explanation of the sketch 1.9:

In each cortex cluster, the activity neuron generates a mean value signal, marked as x1, x2, x3 and x4 in sketch 1.9.

On the one hand, these activity neurons all project into the nucleus subthalamicus (4), which generates second stage mean values from them, which are (mostly) permanently active single signals (red +1).

At the same time, each mean value signal in the switch core Substantia nigra pars compacta (3) is switched from glutamate (red) to dopamine (green) (subtype D1 - excitatory). The excitatory dopaminergic signals reach the striatum (more precisely the striosomes in the striatum) (1) and end up in GABA-excitatory neurons, which switch these signals from dopamine (green) to GABA (blue). The axons of the GABAergic striatum neurons branch out and project inhibitively to the substantia nigra pars compacta (3) as well as to the globus pallidus interna (2). The neurons of the globus pallidus interna receive two signal inputs: First, each neuron receives a glutamatergic input signal from the nucleus subthalamicus (red +1). These output neurons would then be permanently excited and would send out a GABAergic continuous signal (one signal) if the second input was not inhibition by the GABAergic input of the striatal neurons (blue).

The output y1, y2, y3, y4 in the sketch is therefore the negated cortex output, i.e. the negated mean value signals x1, x2, x3 and x4. This output is inhibiting. In addition, the output is - compared to the original output of the cortex - slightly time-delayed, because the signals had to travel a relatively long distance.

If the output were exciting instead of inhibiting, there would be a positive negation nucleus.

The influence of the inhibitory projection of striosomal neurons of the striatum (2) on the substantia nigra pars compacta (4) will be discussed later. This projection makes it possible to perceive the basal ganglia system as an oscillating circuit that generates the system clock of the brain computer. A separate chapter is dedicated to this fact.

The necessary (positive or negative) input signals are not always fed to a negation core from outside. However, this is the case with the Globus pallidus interna.

If the input signals do not come from external nuclei, they must be generated in the negation nucleus itself. For this purpose, a negation nucleus then needs additional, exciting input from magnocellular neurons, preferably from mean neurons.

A positive negation nucleus with internal single signal formation receives excitatory magnocelluar input and forms excitatory single signals from it. Another type of inhibiting input inhibits the single signals and is thus negated at them. The negated output of the nucleus is exciting.

A negative negation nucleus with internal single signal formation receives excitatory magnocelluar input and forms inhibitory single signals. Another type of inhibiting input inhibits the single signals and is thus negated at them. The negated output of the nucleus is inhibitory.

The input to be negated must be inhibiting, because it has to suppress the formed input signal. Therefore an inhibiting input is another characteristic of such nuclei. For this reason, excitation signals must be switched to inhibitory transmitters before negation in an upstream switching core.

-        Exciting input to large, magnocellular, integrative neurons that form the single signal (single-signal neurons, main neurons) These neurons can be recognized by their huge dendrite trees. They can act excitatory or inhibitory.

-        Preferably, the single-signal input should already come from large, magnocellular mean-value neurons, e.g. from layer V of the cortex, so that a stable continuous signal (single signal) is actually formed and not a temporarily active mean-value signal

-        Inhibitory input that has a strong inhibitory effect on the single-signal neurons (main neurons) (synapse near the axon mound or near the cell body at the dendrite trunk).

-        The excitatory input for the single-signal neurons can in the nucleus simply end at the main neurons (e.g. striatum, more precisely matrix). However, it can also pass through this nucleus and leave it again (e.g. nucleus ruber).

-        Negative negation nuclei with internal single-signal formation consist of only one nucleus, whose magnocellular main neurons have an inhibitory effect. They are usually excited by the excitatory axons of superior subsystems passing through this nucleus. The single-signal excitation formed is strongly (totally) inhibited by another type of inhibitory input, which negates the latter input (e.g. matrix of the striatum).

-        The input to be negated must always be inhibiting. If necessary, it must be switched over from an energizing to an inhibiting transmitter in an external switching core.

-        Each output neuron receives both the excitatory, externally generated input signal and the strongly inhibitory input to be negated close to the cell nucleus, most effectively directly at the axon mound. Therefore, the nucleus usually contains only small-cell, i.e. parvocellular neurons.

With regard to the following chapters, it should be pointed out that there is another class of nuclei in addition to the neuronal negation nuclei, whose distinguishing features are almost completely similar to those of the negation nuclei. These are the inversion nuclei, which will be described later. They differ from the negation nuclei only in some inconspicuous but function-determining details. 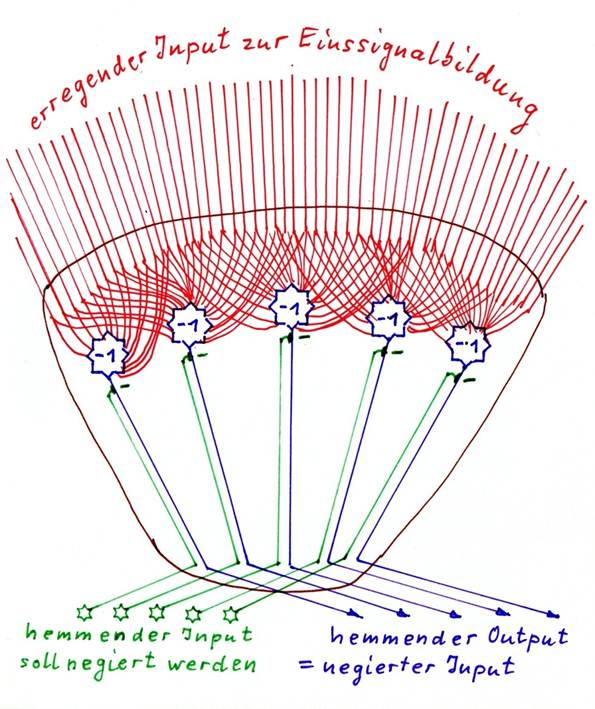 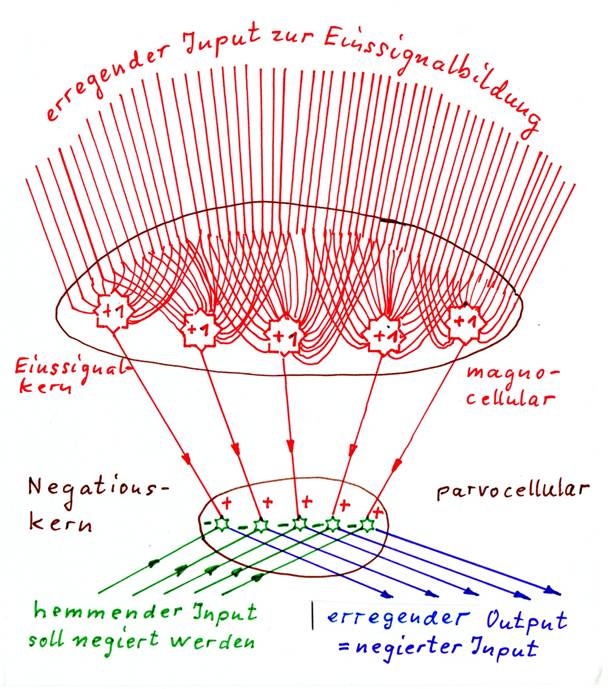 Theorem 1.8: The nucleus ruber is a positive negation nucleus with internal single signal formation for the signals of the globus pallidus interna

He receives exciting input from the cortex. In relation to the cortex clusters, it receives both the output of the signal neurons and the output of the magnocellular activity neurons (mean neurons). The latter input is used in the nucleus ruber to form the positive input signal. It originates predominantly from the precentral gyrus. 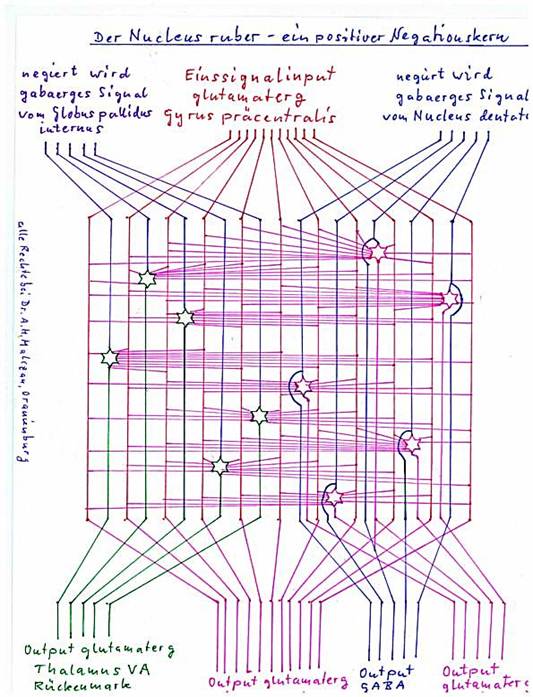 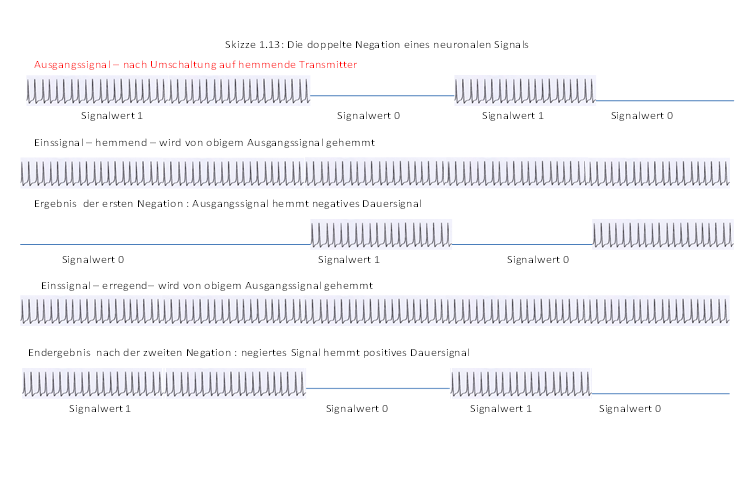